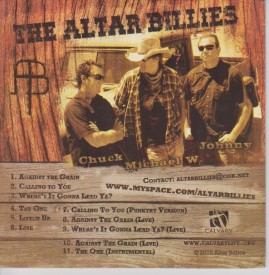 ALTAR BILLIES – S/T 4.00/6.99
11 Tracks in cardboard Sleeve with full color artwork.  The Altar Billies are a rockabilly/psychobilly trio that perform the music of the Altar Boys (A punk/rock group from the 80s and early 90s). Led by Altar Boys front man Mike Stand on geetar and vocals, the group has taken the music of the Altar Boys, stripped it down to its roots, put a twang to it, and a swing that will keep your toes a tapp’n and your fingers snapp’n.

TERRAPHOBIA – EVILUTION (Soundmass) 7.80/12.99
Barcode: 4260236090824
Soundmass was pleased to announce the signing of Terraphobia for the release of their 5th album “Evilution”.
Originally formed in 1985 by Mortification guitarist Michael Jelinic, 10 years has passed since the last Terraphobia album. After joining Mortification in 2002 and recording 3 albums with these metal legends, this project has lain dormant. But 2011 sees the release of “Evilution”, written, performed and produced by Jelinic. You can expect a feast of melodic thrash/death metal from this mid 2011 release – a unique blend of the modern and old school that is heavy, fast and has plenty of leads thrown in. With a sound that will appeal to fans of Arch Enemy, Bolt Thrower and Scrolls era Mortification, Jelinic’s Terraphobia is swathed in the signature melodic guitar playing that we all know and love from this brilliant musician, coupled with his intense and versatile vocal force.

OSKORD – WEAPON OF HOPE (Soundmass)  7.80/12.99
Barcode: 4260236091777
The history of Oskord begins in the ruins of successful Ukrainian band Holy Blood. As part of Holy Blood, the members of Oskord worked together for 5 years, during which they recorded 4 albums and performed around Europe. After all the members of Holy Blood except frontman Fedor left the band in 2008, guitarist Sergey Nagorny, bassist Alex Andrushchenko and drummer Dmitry Titorenko, full of energy and creativity and not wanting to give up music, decided to continue working together. They immediately recruited Andrey Yakovenko who had begun playing flute and bouzouki at the last few Holy Blood concerts.  Gathering together for their first rehearsal on August 11, 2008, Oskord was born. By spring 2009 they had begun recording their debut album, recruiting vocalist Grigory Nazarov, familiar for his work in Coram Deo, in September 2009.  “Weapon of Hope” is a combination of modern metal and folk that incorporates ethnic instruments like the flute, tin and low whistles and bouzouki. Their sound will appeal to fans of Eluveitie and Holy Blood.