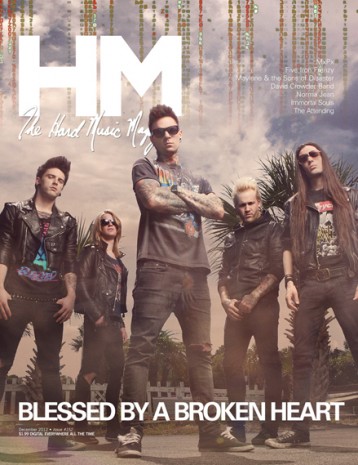 Jan 24, 2012 – After weeks of teasing fans, silencing naysayers and polarizing the press, the international shred-metal consortium known as BLESSED BY A BROKEN HEART are finally ready to take the advice they offered up in their latest single: “Shut Up and Rock.” At long last, the band are putting their money where their mouths are and releasing their much-hyped new album Feel the Power, in stores everywhere today on Tooth & Nail Records.

A pulse-raising blast of glammed-up metal, Feel the Power is being praised by critics for embracing the glorious shred metal of the ’80s while still offering something singularly fun, inventive and sharply relevant for today.

“We’re super stoked! The record we’ve spent the last few years pouring our hearts and souls into is finally releasing to the world,” says BBABH drummer Slater. “We’re excited for our fans who have been patiently waiting to get their hands and ears on it. We really challenged ourselves on this record, and we feel we put together a record that, from start to finish, is sheer metallic perfection. We’re proud of it, and we know our fans are gonna feel the same way.”

What People Are Saying Early About ‘Feel The Power’:
“[A] blend of DragonForce, Andrew W.K. and Avenged Sevenfold… the totally over-the-top ‘Holdin’ Back For Nothin” will absolutely explode mosh pits.” – Alternative Press

“An ear-candy overload of kick ass hair-metal with all the screaming guitars, massive hooks, mega-choruses, and stacked harmonies you could ask for. This album is a shred-metal smorgasbord…bringing serious muscle to the glam metal game. (9/10)” — Hard Rock Haven

“By bringing together 80′s metal, modern alternative rock, and just a dash pop, BBABH have etched a legacy all their own in the industry and nothing has made that more clear than their Tooth & Nail debut, Feel The Power… BBABH have set themselves apart in a time where many cannot. (8.5/10)” -Under The Gun Review

“[Blessed By A Broken Heart] has revitalized their sound by bringing heavy influences of hair metal to the 80′s mix, making this a highly enjoyable metal release (8/10).” – Lexington Music Press

“Shred guitar that could go on for days … Blessed By a Broken Heart are doing their part to keep the ’80s alive.” – Rock Edition

The follow-up to the band’s celebrated 2008 album Pedal to the Metal (Century Media), Feel the Power finds BLESSED BY A BROKEN HEART shrugging off metalcore trappings in favor of something more heartfelt. “The whole band is still obsessed with the ’80s, and that’s bled into our lifestyles. It’s not just when we’re on tour: We all kind of dress ’80s; we still have mullets. It’s become part of our lives,” explains singer Tony Gambino.
Formed in 2003 in Montreal, Canada, BBABH released its first album – All is Fair in Love And War – a year after its inception. 2008 saw the release of Pedal To The Metal on Century Media Records, which was followed by years of incessant touring throughout the US, UK, Europe, Japan and Australia alongside the likes of JUDAS PRIEST, A DAY TO REMEMBER, BRING ME THE HORIZON, MEGADETH, STEEL PANTHER and more.

Like any artist with a notable body of work, BLESSED has experienced a near constant evolution over the past eight years, in some part due to lineup changes, but mostly due to a stylistic progression away from pure metalcore in favor of more traditional metal and hard rock. One listen to Feel The Power will confirm that not only is this not the same band that recorded All Is Fair, but that that very fact is their saving grace. Staying ahead of the curve and distancing themselves from the pack is the key to BLESSED BY A BROKEN HEART‘s longevity, and the reason the new album will resonate with even the most veteran headbangers.