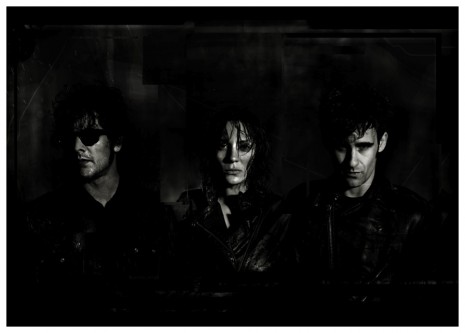 Black Rebel Motorcycle Club is revving up to unleash their fifth studio album, Beat The Devil’s Tattoo, on March 9, 2010, signifying the band’s first full-length on their own Abstract Dragon, in partnership with Vagrant Records. This album welcomes exciting beginnings, including new drummer Leah Shapiro, as well as their new label, though the trio returned to the familiar setting of Philly to pen this record. They wrote and recorded it in the very studio that produced their widely acclaimed third LP, Howl, before returning to hometown L.A. to add the finishing touches.

The band’s accustomed globetrotting will recommence with an initial headline tour, kicking off February 26 in Sacramento and culminating at New York City’s Webster Hall on April 8. Pre-sale for all shows will start Wednesday, December 2, available here.

Known for their impassioned live performances, the band recently offered a 2 DVD, 1 CD set aptly titled, Live (Abstract Dragon/Vagrant), earlier this month. The DVDs feature more than two hours of concert footage captured from three sold out shows in Berlin, Dublin and Glasgow, and chronicles the end of the band’s 2007 tour in support of Baby 81. Additionally, it includes intimate, behind-the-scenes footage, glimpses into the making of 2005’s Howl and is rounded out with a bonus live album featuring 14 songs.
BLACK REBEL MOTORCYCLE CLUB HEADLINE TOUR