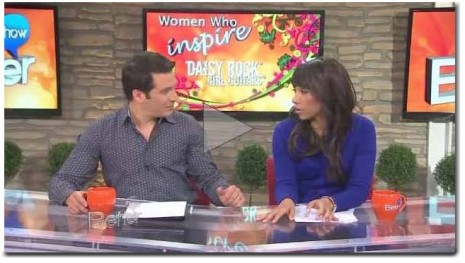 Tish Ciravolo, President and Founder of Daisy Rock Girl Guitars, was featured on Better.tv, the nationally syndicated lifestyle TV show, in its special Women Who Inspire episode, which launched May 7, 2012. The story of Tish Ciravolo, ‘80s rock and roller, wife, mother, and entrepreneur, was unfolded and shared with viewers by Better.TV co-host, JD Roberto, straight from Daisy Rock’s performance lounge in Los Angeles, CA.

From drawings first etched by her daughter and design plans for manufacturing quality guitars specifically designed for the female form, to overcoming discrimination in the music industry and empowering young girls to play the guitar and enjoy music, Ciravolo’s story was aptly depicted as one of total inspiration. “I’m trying to get girls to understand what’s inside them, what can come out . . . the more girls that discover guitar—and when their voice is heard—the more we change the world,” shared Ciravolo.

Daisy Rock friend, Vicki Peterson of the Bangles, stopped by to share her feelings about Daisy Rock Girl Guitars: “It’s exciting to know that when we’re out on the road with the Bangles, that they—Daisy Rockers—are out there playing.” The segment also featured appearances by Daisy Rock artists Madison Logan, Claudia Dunn, Cheska Zaide, and Jamey Geston, including a special performance by the all-girl, all-sister band, the Sledge Grits Band. “I think they’re fantastic – they sound great and they have smaller necks for our hands – they’re just amazing,” said the band’s bassist, Ella, of the Daisy Rock line of guitars and basses.

The show gave special attention to Daisy Rock’s efforts toward inspiring the next generation of female musicians, particularly supporting camps, studios, and educational institutions that are empowering girls. In closing, the show wrapped up by echoing Tish and Daisy Rock’s vision to do whatever it takes to help girls play guitar and enjoy music.

Better.tv is part of the Better Homes & Gardens network. The Better show is seen in 85 million homes spanning 165 markets.

ABOUT DAISY ROCK GIRL GUITARS
Daisy Rock Girl Guitars is the original girl guitar company dedicated to successfully supplying and marketing professional quality guitars for females of all ages. All Daisy Rock guitars are designed specifically for the female form and feature lightweight bodies, “Slim & Narrow” neck profiles to better fit smaller hands, and are available in inspiring finishes. Daisy Rock Girl Guitars’ ongoing mission is to do whatever it takes to help girls play guitar and enjoy music.

Daisy Rock Girl Guitars is led by its Founder and President, Tish Ciravolo. Ciravolo is a highly acclaimed expert on female empowerment and females in music. Tish’s expertise has been immortalized by her induction into the Museum of Making Music, the world’s premier museum showcasing the history of the music products industry, and she is widely regarded as a visionary in the industry. Ciravolo’s deep insight into the subject of girl guitars and female empowerment has made her a sought after and frequent contributor on national and international television, newspapers, magazines, websites, and radio programs including People, Time, Newsweek, CNN, ABC, NBC, FOX, VH1, the Premier Radio Network, BBC Radio, and the Associated Press. Daisy Rock Girl Guitars is in over 25 countries worldwide, and is co-owned and distributed by Alfred Music Publishing.