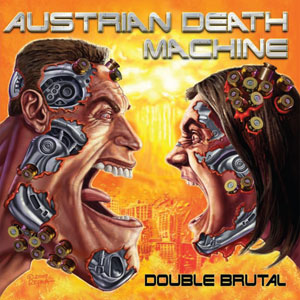 AUSTRIAN DEATH MACHINE releases new track this Halloween!
AUSTRIAN DEATH MACHINE, the California group consisting of As I Lay Dying’s Tim Lambesis and famed action hero Ahhnold, has just released the band’s second single off of Double Brutal. The track ‘Who Told You, You Could Eat My Cookies’ was inspired by the Arnie movie Jingle All the Way and will go live on the AUSTRIAN DEATH MACHINE MySpace page this Halloween. “I was so excited people thought my vocals sounded like cookie monster that I jumped at the chance to write a song about COOKIES!” comments Tim.

Go HERE this Halloween to check out the track ‘Who Told You, You Could Eat My Cookies’

“…its fun and entertaining as a thrash album and the skits are often humorous, especially with Josh Thompson’s more involved and often funny, spot on Arnold banter…” Teeth of the Devine.com

“Like the debut album, each song on the first disc of Double Brutal is based on one of many Arnold films, including timeless classics ‘Jingle All The Way’ and ‘Commando.’ The solos and breakdowns that dominated every track on Total Brutal appear on the sophomore album in grander fashion…The musicianship is strong and the lyrics have a witty bite” About.com

“The instrumental performances throughout are impeccable, the riffage in particular containing a nice blend of finger-breakingly intricate yet hook-laden riffage, bludgeoning breakdown-fodder and rampaging hardcore punk-esque power chord progressions” OneMetal.com

“Austrian Death Machine musically has become a larger reflection of modern thrash, crossover thrash, metalcore (they have a few breakdowns, though they’re not littered across the whole album) and even a little bit of death metal. Those guitar solos shred the fretboard to splinters!” Way Too Loud.com

For those who haven’t already picked it up, fans can purchase Double Brutal HERE available as both a two disc Digipak and a digital download. This two-disc goliath features one disc of all new heavy tracks in the tradition of all of Ahhnold’s greatest cinematic moments and a second disc of cover songs including songs originally performed by METALLICA, MEGADETH, MISFITS, JUDAS PRIEST and more, with cover art once again being tackled by Ed Repka (MEGADETH, DEATH, NOFX, NUCLEAR ASSAULT, etc).