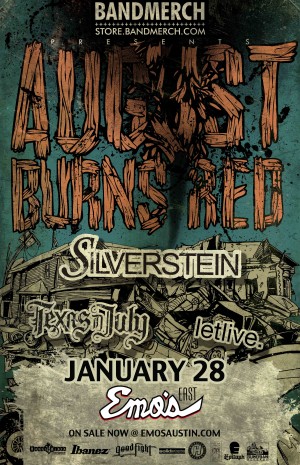 Genre titans AUGUST BURNS RED are debuting a video for ‘Empire’, the crushing lead track from their monster 2011 album, Leveler. The blistering performance-heavy video, premiering today at VEVO, is the band’s second off ofLeveler, following the cinematic clip for ‘Internal Cannon’ which debuted in late summer.

Watch the video for Empire here:

“The ‘Empire’ video shoot was an exhausting 8 hours of sweating and head banging,” explains guitarist JB Brubaker. “But it was worth the exhaustion as I think it’s the coolest performance video we ever did. I especially like the old school ‘Godzilla’ looking shots that are in the middle and the coloring and filters that were applied to the post production brought everything together.”

The video premiere comes hot on the heels of the band’s recent announcement of a 2012 North American headlining tour presented by BandMerch, marking the band’s first announced dates for 2012 and their first North American dates since their summerlong stint as a mainstage act on the 2011 Vans Warped Tour.

2011 was a banner year for the heavyweights – their fourth album, Leveler, rocketed to the top of the Billboard charts, debuting at #11 on the Billboard 200 in addition to entering the charts as the #1 Hard Rock album and #2 Rock album.Leveler also displayed staying power and has become the band’s fastest selling album to date.

While the band already has two albums that topped 100,000 in sales (2009’s Constellations and 2007’s Messengers), Leveleris on pace to set a new high-bar for AUGUST BURNS RED, adding commercial success to the critical praise which the album has garnered from the likes of Alternative Press, Revolver, Rock Sound and more, in addition to high marks from dozens of other outlets. The album pushes the band’s sonic boundaries in every direction, yet emerges as an unquestionably heavier album than its predecessor. It’s a game-changer, for ABR, and for fans of hard rock everywhere.

Select praise for ‘Leveler’:
“From start to finish, Leveler is exhilarating… the quintet’s strongest work to date. (4/5)” -ALTERNATIVE PRESS
“AUGUST BURNS RED have crafted a signature brand of metalcore that challenges the genre’s status quo … [They’ve] set their own bar even higher on Leveler, and have done so for all the scene in the process. (4.5/5)” -REVOLVER

“Leveler takes the band to a unique level… not only easily approachable but entertaining, impressive, and new. (10/10)” -OUTBURN

“By far the greatest album AUGUST BURNS RED have ever produced” -EXCLAIM!

“Leveler has the potential to be another breakout record for the group, with a maturing sound and greater experimentation. Hopefully, this new album will help turn even more skeptics into headbanging converts” -METAL INSIDER