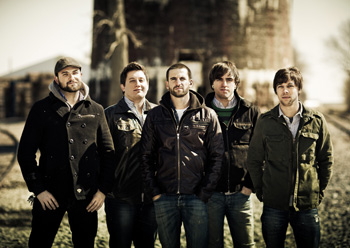 Genre giants AUGUST BURNS RED are gearing up to release one of the most anxiously awaited hard rock albums of 2011 – a colossal effort entitled Leveler – available in stores and online June 21st in both regular and deluxe editions.
Today, the band gives the public the first taste of Leveler by streaming the lead track ‘Empire’ on its Facebook page.

“‘Empire’ is a pretty intense song and we feel it starts the album out with a bang,” explains guitarist/principle songwriter JB Brubaker. “My favorite part is the melodic section in the middle with the group singing. We’ve never done anything like that before and it makes the song special for me.”

For those who think the s-word (singing) means the band has “mellowed” out, be warned: ‘Empire’ is a blistering track that sets the stage for an album that is unquestionably heavier than the band’s lauded 2009 breakout Constellations. Similarly, detractors should be warned that the band isn’t content with recycling past tricks.

“Putting out a fourth record is a little scary because we obviously have our sound figured out at this point, but we don’t want to put out a record that just sounds like a redux of our previous albums,” explains guitarist JB Brubaker. “Our tastes are always evolving as musicians and we’ve been motivated to progress as a band and push ABR in different directions, while maintaining the characteristics that made us the band we are in the first place.”

A number of pre-order bundles are available now for Leveler in a variety of packages including the special edition and vinyl packages. Fans can choose bundles which include extras from a pre-order exclusive t-shirt to AUGUST BURNS RED baseball cards.

AUGUST BURNS RED will take to the road as a mainstage act on this summer’s Van’s Warped Tour, which will deliver them to almost every major market in North America to bring Leveler‘s sonic spectacle directly to fans.

For Leveler, AUGUST BURNS RED re-teamed with super producer Jason Suecof, the man behind the boards on their 2009 breakout, Constellations, which landed at #24 on the Billboard Top 200 and has sold more than 95,000 copies. The result is an album that pushes the band’s sonic boundaries in every direction, yet emerges as an unquestionably heavier album than its predecessor. It’s a game-changer, for ABR, and for fans of hard rock everywhere.

Select Praise for the band’s 2009 release, Constellations
“One of the genre’s brightest hopes… [AUGUST BURNS RED] craft a sound as bone-crushingly heavy as it is catchy.” -REVOLVER

“A fierce, punishing album loaded with muscular breakdowns, screaming guitar leads and ass-kicking double-bass-thunder… AUGUST BURNS RED will be a band to watch for quite a while.” -ALTERNATIVE PRESS

“Constellations is one of the more anticipated metal albums of 2009… The album takes the band in directions never before attempted and raises the bar on the band’s profile as a technical ensemble.” -NOISECREEP

“A great sense of songwriting and brutal, in-your-face execution… [AUGUST BURNS RED is] head and shoulders above the competition.” -OUTBURN

“AUGUST BURNS RED have created an intense and well-crafted catalog of songs that serve as evidence that they stand above the masses.” -SUBSTREAM MUSIC PRESS
“AUGUST BURNS RED bring it every time they release an album, and so far, Constellations is the pinnacle of their career.” -ABSOLUTE PUNK