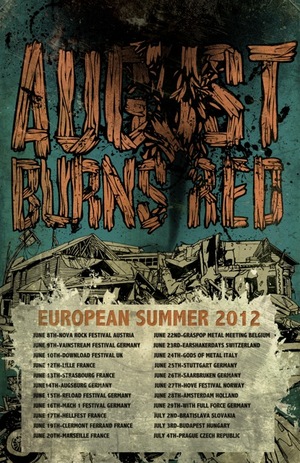 Return to Europe for Headlining and Festival dates

Tour to hit 13 countries in 4 weeks

After a momentous 2011 that saw their latest album, Leveler, debut at #11 on the Billboard charts, hard rock juggernauts AUGUST BURNS RED have shown an unwillingness to slow down, kicking off 2012 with headlining tours of North America, Japan and Australia with stops in New Zealand, Taiwan, Indonesia, Phillippines, Malaysia,  Thailand and Singapore along the way.

Now the band turns its sites firmly on Europe with the announcement of a string of Festival and Headlining dates throughout the summer that will see ABR hit 13 countries in 4 weeks before returning stateside to support the legendary REFUSED at Philadelphia’s Riot Fest, followed by a return to South America. (Dates Below)

“I can say with all sincerity that ABR has never looked forward to a European tour as much as we are looking forward to our upcoming run in June/July,” says guitarist JB Brubaker. “We haven’t done the ‘festival circuit’ since 2009 and that was one of our favorite overseas tours to date. I’m pumped to have the opportunity to play alongside some legendary bands and in front of some massive crowds!”

Already among the most respected acts in the genre, AUGUST BURNS RED solidified their status further with the June 2011 release of their fourth studio album, Leveler, which rocketed to the top of the Billboard charts – debuting at #11 on the Billboard 200 in addition to entering the charts as the #1 Hard Rock album and #2 Rock album. Leveler has also displayed incredible durability and staying power, having become the band’s fastest selling album to date by a large margin.
Following two albums that have topped 100,000 in sales (2009’s Constellations and 2007’s Messengers), Leveler is on pace to set a new high-bar for AUGUST BURNS RED, adding commercial success to the critical praise which the album has garnered from the likes of Alternative Press, Revolver, Rock Sound and dozens of other outlets. The album pushes the band’s sonic boundaries in every direction, yet emerges as an unquestionably heavier album than its predecessor. It’s a game-changer, for ABR, and for fans of hard rock everywhere.

“From start to finish, Leveler is exhilarating… the quintet’s strongest work to date. (4/5)” -ALTERNATIVE PRESS

“AUGUST BURNS RED have crafted a signature brand of metalcore that challenges the genre’s status quo … [They’ve] set their own bar even higher on Leveler, and have done so for all the scene in the process. (4.5/5)” -REVOLVER
“Leveler takes the band to a unique level… not only easily approachable but entertaining, impressive, and new. (10/10)” -OUTBURN

“By far the greatest album AUGUST BURNS RED have ever produced” -EXCLAIM!

“Leveler has the potential to be another breakout record for the group, with a maturing sound and greater experimentation. Hopefully, this new album will help turn even more skeptics into headbanging converts” -METAL INSIDER