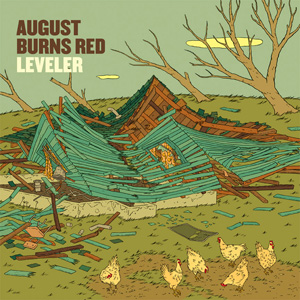 Leveler, the highly praised fourth album from genre giants AUGUST BURNS RED debuted at an impressive #11 on the Billboard 200, with total first-week sales of 28,535.

The anticipated album also landed at #1 on Billboard’s Hard Rock chart and was the sixth best selling album overall among the week’s new releases. Further, the ferocious album hit the #1 position on the iTunes Rock Charts.

Leveler’s commercial success matches the critical praise that the album has garnered from the likes of Alternative Press, Revolver, Rock Sound and more, in addition to high marks from dozens of other outlets (see select praise below). Vocalist Jake Luhrs can be seen on the cover of the upcoming issue of Alternative Press.

In a time when album sales across the board are declining, Leveler’s first week sales represent an industry defying 40% growth over the first week sales of the band’s 2009 breakout album, Constellations, which debuted at #24 in the Top 200 and has gone on to sell more than 95,000 copies.

For AUGUST BURNS RED, Leveler represents an enormous step forward in a career defined by steady growth. The band is currently on the road as a mainstage act in this summer’s Van’s Warped Tour, which will deliver them to nearly every major market in North America to bring Leveler’s sonic spectacle directly to fans.

On Leveler, AUGUST BURNS RED re-teamed with super producer Jason Suecof. The result is an album that pushes the band’s sonic boundaries in every direction, yet emerges as an unquestionably heavier album than its predecessor. It’s a game-changer, for ABR, and for fans of hard rock everywhere.

“From start to finish, Leveler is exhilarating… the quintet’s strongest work to date. (4/5)” -ALTERNATIVE PRESS

“AUGUST BURNS RED have crafted a signature brand of metalcore that challenges the genre’s status quo … [They’ve] set their own bar even higher on Leveler, and have done so for all the scene in the process.” -REVOLVER
“By far the greatest album AUGUST BURNS RED have ever produced” -EXCLAIM!

“Leveler has the potential to be another breakout record for the group, with a maturing sound and greater experimentation. Hopefully, this new album will help turn even more skeptics into headbanging converts” -METAL INSIDER
“The Pennsylvania quintet is more than just meathead metalcore, which they showcase demonstratively throughout Leveler… AUGUST BURNS RED continuously aims for the jugular throughout Leveler, leaving you much like the destroyed habitat depicted on the cover.” -ABSOLUTE PUNK
“AUGUST BURNS RED has done what I thought could not be accomplished. They have topped Constellations. This album is amazing on each and every imaginable level… All puns aside, this may be your album of the year. It maintains heaviness without sacrificing beauty. (5/5)” -THE NEW REVIEW
“This band has well earned their position as one of metalcore’s top bands… one of the best releases of the year (9/10)” -INDIE VISION MUSIC

“Leveler finds AUGUST BURNS RED at the top of their game, succeeding from start to finish at creating what is arguably their strongest, and at times most ambitious, record to date. (4.5/5)” -REVIEW RINSE REPEAT

“[AUGUST BURNS RED] break new sound ground as they diligently push themselves further and progress faster than the rest of the metalcore pack… There is not a shred of doubt that these guys are quickly and accurately perfecting their trade. (4/5)” -METAL RIOT
“Leveler is undoubtedly an AUGUST BURNS RED album, but simultaneously manages to add new elements to the bands repertoire while allowing the band to enthusiastically and proudly prove to the Metal/Hardcore community that they are, quite simply, unstoppable.” -THE RECORD REBELLION
“AUGUST BURNS RED has aged yet not mellowed, writing their most intriguing and technically accomplished album to date. By choosing to incorporate their diverse musical tastes, they’ve spawned an end product that retains the traditional ABR elements while making full use of their maturity as songwriters… a truly spectacular record (4.5/5)” -MIND EQUALS BLOWN

“Balancing inventive skill and lacerating fretboard work can push a group into a pitfall of repetition… Each second of Leveler, on the other hand, goes straight for your neck (4/5)” -BLARE

“AUGUST BURNS RED has been able to conquer with every release (3.5/4)” -DECOY MUSIC

“Over the past eight years, AUGUST BURNS RED have continued to stride along their own path. Their latest endeavor, Leveler, shows the quintet once again breaking down barriers and creating songs full of character and vigor.” -ROCK EDITION

“AUGUST BURNS RED had a mission to create their most diverse record to date… To say that Leveler is just another typical AUGUST BURNS RED release would be just plain naive. (4/5)” -THE PUNK SITE

Jul 15 – Mississauga ON @ The Flats at Arrow Hall