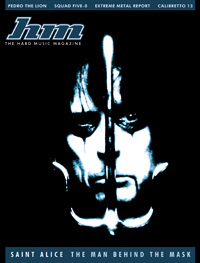 It’s a bill that fans of horror and hard rock could only dream of until now: Rob Zombie and Alice Cooper sharing the stage for a night of theatrical rock n’ roll madness.  For the first time ever, the “gruesome twosome” will play an exclusive limited run of North American tour dates beginning April 26th at the MTS Center in Winnipeg, MB.  Rob Zombie commented, “The dream or the nightmare comes true!  Me and The Coop have been talking about touring together for the last 15 years and finally the moment is here.  This will be without a doubt a Rock ‘N’ Roll Spooktacular for all the Cool Ghouls.”  Alice Cooper added, “I’m looking forward to theses concerts with Rob.  It’s sort of like Dracula Vs. Frankenstein.  We’re like this generation’s classic monsters.  When we’re not onstage frightening audiences, we’ll be backstage trying to scare each other.”

Following the dates with Alice Cooper, Rob Zombie and longtime bandmates guitarist John 5, bassist Piggy D and drummer Tommy Clufetos will hit the road for an extensive North American trek to co-headline this year’s Mayhem Festival (visit: www.robzombie.com or www.myspace.com/robzombie or please see below for all tour dates).

It’s been a busy year for multi-platinum hard rock artist and filmmaker Rob Zombie.  Zombie’s brand new album HELLBILLY DELUXE 2 just debuted at #8 on the Billboard Top 200 Album chart, marking his second Top Ten debut in 6 months.  The Zombie-helmed Halloween 2 landed at #3 at the box office in August, 2009 and went on to become one of the biggest horror movies of the year, grossing more than $37 million to date.  Zombie will make his television directorial debut with an episode of CBS’ highly-rated show CSI: Miami set to air on Monday, March 1st at 10:00PM, EST.

With more than 15 million albums sold, 7 Grammy nominations, the helming of 5 major motion pictures and dozens of music videos under his belt, Rob Zombie is a force to be reckoned with in today’s entertainment landscape.  Zombie’s unique meld of horror and hard rock has influenced his sound as a musician, and more recently his vision as a director and writer.

Alice Cooper, the rock innovator generally credited with pioneering theatrics and bringing stagecraft to the rock idiom, has been a huge influence on successive generations of artists.  On tour with Rob Zombie, he will be performing his Theatre of Death production that he will subsequently take it on the road in North America and Europe throughout 2010.  He is backed in concert by longtime band members Damon Johnson and Keri Kelli (guitars), bassist Chuck Garric, and drummer Jimmy DeGrasso.  Alice is preparing to release a live Theatre of Death DVD, filmed in London late last year, and is currently in pre-production on a new album.

Alice Cooper is the host of Nights with Alice Cooper, produced and distributed by the United Stations Radio Networks.  Alice anchors 30 hours per week of original Classic Rock programming.  Alice’s time slot reaches 1.1 million listeners (12+) each week, and his affiliates have a weekly reach of over 6 million listeners. For more facts, figures, fans, features and fun go to www.nightswithalicecooper.com.