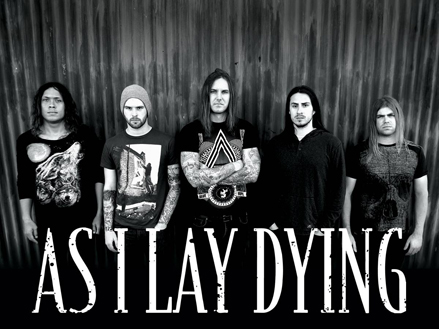 As I Lay Dying’s

A Decade of Destruction Tour Kicks Off Nov 30th in Long Island, NY and Winds Down

Of Mice and Men, The Ghost Inside, iwrestledabearonce and Sylosis

That Let Fans Sit In On Sound Check

and Include Signed Poster and Photo Opp With The Band

Grammy®-nominated metal group AS I LAY DYING has announced plans to give fans in each city on their headlining A Decade Of Destruction Tour an opportunity to purchase 1 of 15 special ticket bundles which include entrance to the band’s sound check, a poster signed on the spot and a photo opp with the band that will be uploaded to the band’s website that night. 15 bundles will be sold in each city for an additional $20 on top of the price of a ticket and can be purchased at: http://shop.asilaydying.com/collections/dod-tour-vip-ticket-bundles.

With over 1,000,000 units sold in the U.S., San Diego metal act AS I LAY DYING are in the midst of celebrating their 10 year anniversary with the national tour and the release of Decas, a 12 track album that offers three brand new songs, cover songs that pay homage to just a few of the bands that have influenced AS I LAY DYING, and remixes by INNERPARTYSYSTEM (Katy Perry, Ladyhawke, Thursday, Good Charlotte and many others), Benjamin Weinman (The Dillinger Escape Plan), Kelly “Carnage” Cairns (Austrian Death Machine, War of Ages), and Big Chocolate (Asking Alexandria, iwrestledabearonce, Suicide Silence).

Head over to www.decasalbum.com for more information.

2.   From Shapeless to Breakable

8.   Beneath the Encasing of Ashes (Re-Recorded Medley)

10. Wrath Upon Ourselves (Benjamin Weinman Remix)

A Decade of Destruction Tour Dates: