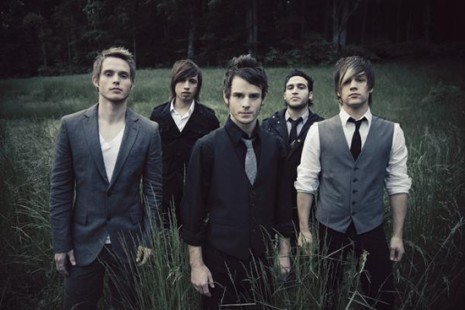 San Antonio rock act Abandon will release its first full-length disc, Searchlights, to retail outlets nationwide Aug. 25, 2009. In support of the project, Abandon will open for Flicker Records act Fireflight this fall on “The Hope Tour.”

Abandon made its label debut last July with the release of a self-titled digital EP, which received rave reviews from critics who called it “catchy” (ChristianityToday.com), “a tasty morsel of what is to come” (jesusfreakhideout.com), and hailed the band for being “at the forefront of the current music industry” (indievisionmusic.com). The EP additionally produced two No. 1 Rock radio singles with “Hold On” and “Providence.”

In April 2009, Abandon released the EP on disc, while giving fans a taste of six new cuts available via digital outlets only. Searchlights combines the best tracks released by Abandon over the last year plus three never-before-recorded songs, “Confession,” “Here We Are Now” and “Safe In Your Arms.”

“Thematically, Searchlights is a promise of rescue from a dangerous place, that if you look up, you will see the light of hope through the dark,” says Abandon’s Josh Engler. “Sonically interesting and energetic with passionate lyrics, we hope fans find what they’re searching for with this record.”

Abandon will debut Searchlights live on the road with Fireflight beginning Oct. 1. Joined by Word Records artist Remedy Drive, “The Hope Tour” will visit major markets including Salt Lake City, Las Vegas, Phoenix and San Antonio. For a complete list of tour dates, visit www.fireflightrock.com. Music from Searchlights can also be heard via Christian radio, with “Be Alive In Me” currently working its way up the Radio & Records Rock chart and “Safe In Your Arms” set to add at CHR radio Aug. 21.

With a sound that has been likened to popular bands U2 and The Killers, Abandon comprises brothers Josh Engler (vocals) and Justin Engler (rhythm guitars), cousins Dave Vela (drums) and Stevan Vela (lead guitar) as well as Bryan Fowler (bass). They formed as part of their church’s worship band, eventually moving on to play local shows. The group came into relationship with Forefront Records after Director of A&R Chris York heard them perform at a Nashville club. For more information on Abandon, visit: www.myspace.com/abandontx.