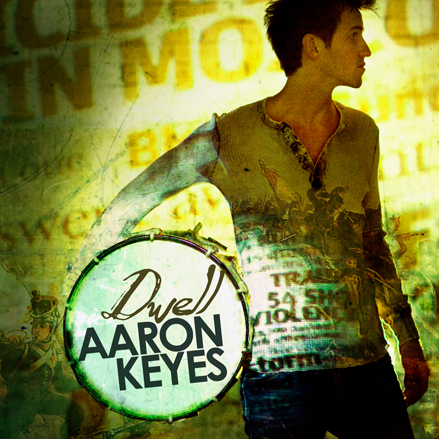 The last thing you want to do, in the middle of a fight, is… NOTHING.

Unless, of course, you expect someone bigger to show up and fight for you.

It’s an upside down principle, or so it seems, but for worship leader and songwriter Aaron Keyes, this is the key to worship, even the key to life itself: “Deliverance, provision, miracles—everything we pray for in the rough seasons of our lives—most often come to pass in the context of praise, worship, sacrifice and abiding in the shelter of the Most High God. …Everything is wrapped up in our willingness to wait.”

For Aaron, worship pastor at Grace Fellowship Church in Snellville, GA for the last eight years, it’s that waiting room that fuels his passion for and approach to worship. He believes, without reservation, that you can’t get there (or lead anyone there) without the Word of God. That is why he and his wife, Megan, open their home to disciple young worship leaders for several months out of the year, dedicating their lives to reshaping worship leadership for the next generation.

“We want to shift what worship leading looks like,” he says, “from worship leaders simply leading songs to worship pastors leading people to knowing God better, to resting our hearts in Him, to expressing our hearts to him—physically, instinctively, fully, expressively… not just emotion, passion and excitement, but to declare the promises of God in the Bible with reverence and orthodoxy.”

Never has this calling been more vibrantly displayed than in the songs on Dwell, Aaron’s second Kingsway recording, set to release June 21. Produced by Stu G (Delirious?) and John Hartley (Matt Redman, Rebecca St. James), Dwell is a modern collection of 13 songs, composed in the battle of the everyday, forged in the fires of sacrifice and sharpened by the iron of Scripture.

“It doesn’t seem right that I can go to some of the biggest worship conferences in the world and see some of the biggest worship leaders in the world and no one’s saying anything about the Bible,” Aaron explains. “It makes me nervous because if the Word of God is a lamp to our feet and a light to our path, if we’re leading without it, we’re leading people into darkness.”

This mandate, to help restore the Word of God as central to worship, is the constant in Aaron’s music and what sets him apart from much of the current landscape. The songs of Dwell were pulled from 60-70 anthems that Aaron ‘road tested’ over time. Taking these songs into the studio, Aaron’s producers John Hartley and Stu G helped handpick the best of these anthems.  “John is so great at identifying and producing songs that connect with congregations,” Aaron explains, “and Stu G lives in these new fresh, artistic sounds, so I think we’ve struck a good balance, with singable melodies that are sonically not as predictable as something we would’ve done years ago.” The result is remarkably different.

“One of the toughest jobs we had on Dwell was choosing which songs to leave off!” exclaims Stu G.  “The songs we ended up with work so well together because they all come out of authentic experience and have been tried and tested in a corporate environment. What I love about Aaron is not only his desire to write new songs that serve the church, but also his desire to lead well and raise up new leaders by opening up his home and sharing his life. Dwell is about more than simply music and singing.”

Based on Psalm 91, a prayer of protection, with a bridge from Isaiah 54:17, the title track, “Dwell,” is one of the defining moments on the record, Aaron says. “Our personal worship, our willingness to abide or dwell in the shelter of the Lord, it’s so connected to God moving on our behalf, moving for us, to the Kingdom of God advancing around us. It’s about more than we can see with our eyes. You can see several pictures in the Old Testament over and over again, where the worshipers go out and then everything changes. That dwelling in the presence of the Lord is so critical to everything. The enemy can throw things at us, he can even take our lives, but he cannot prosper… we will ultimately triumph. And it’s all wrapped up in our willingness to wait on the Lord. As we wait, he wars for his people. As we abide, he acts. As we rest, he moves, he shows up.”

Praise the Lord, our mighty warrior

Praise the Lord, the glorious one

By his hand, we stand in victory

By his name, we overcome

The “Song of Moses,” a rare jewel of a worship song, paints a glorious picture of God as warrior. “The first song of the Bible is the song of Moses in Exodus 15,” Aaron explains. “We wanted to write a song we could sing on this side of the Cross, but one that had the heart of Moses after Israel had gone into the Red Sea. We didn’t just want to write the song solely because we see a glaring hole in our worship vocabulary (i.e., God as our Warrior, mighty in battle), but also because, personally, it’s where we’ve been living.”

“Sovereign Over Us,” a calming percussion/piano-driven song, continues that theme, connecting Joseph’s story in Genesis 50 to the power of Romans 8:28: ‘Even what the enemy means for evil, you turn it for our good and for your glory; Even in the valley you are faithful, you are working for our good.’

It comes as no surprise that these, as all the songs on Dwell, were born out of a season of fighting, says Aaron. “Isaiah 30:32 says, ‘Every blow the Lord lays on the enemy will be to the music of tambourine and harps.’ So God moves in battle to the rhythm of our worship. …If we can get on the floor, get on our faces, worship God, trust Him at all times. It’s not a formula, it’s not twisting God’s arm. You just can’t out-give him. He will not be in debt to you. You give and give and all of a sudden, his heart is turned and moved. We’ve seen this very personally in our lives.”

And when God shows up, he says, the fight is simply over. There is healing, forgiveness and freedom that no amount of human warring can ever hope to bring about.

“It’s not rocket science,” says Aaron, whose ministry at Grace Fellowship places a high priority on unconventionally reaching out to the Muslim community. “We’re just trying to respond to the Word of God every time we step up.” And therein lies the challenge, he says.

“It would be easier to rely on our own talent,” he says, because then you “don’t have to rely on God. You don’t actually have to listen to the voice of God or discern what he’s doing. If you’ve got your set list, your band is together and you can kill it, you can survive in most contexts of worship. But to really spend time in God’s presence, soaking in the Word of God, internalizing what it says, giving your life away, that takes a lot of time… its so much easier to write, record and tour than it is to lead people to know God through the hard stuff, really leading people over time.”

That, he says, requires more than talent. It requires sacrifice. “I’m fine with bigger platforms if they are being leveraged to make disciples, but if not, I just don’t know what the point is.” For Aaron, all of life is leveraged by knowing God’s voice, by resting and responding to the truth of His Word.