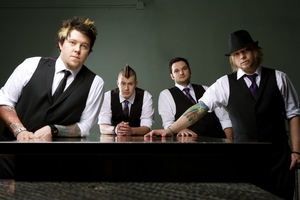 12 STONES
READY TO SHOW WHAT’S ‘BENEATH THE SCARS’
WITH THEIR INFECTIOUS NEW ALBUM OUT MAY 22
12 STONES will release their fourth album, BENEATH THE SCARS, May 22 on the Executive Music Group label via Fontana/Universal.  The band joined forces, once again, with producer Skidd Mills (Saving Abel, Skillet, Saliva), who had previously worked with 12 STONES on 2007’s ANTHEM FOR THE UNDERDOG.  The first single, “Infected,” mixed by Johnny K (3 Doors Down, Disturbed, Staind), is currently being serviced to Rock radio and will be available for download on iTunes and Amazon on February 28.
Fans who pre-order of BENEATH THE SCARS from band’s official website (www.12stones.com) will have early download access to six songs starting March 6.  The rest of the album will then be made available on May 22.
A lyric video for “Infected” recently premiered on Loudwire.com and can be seen here: http://bit.ly/wDzbyW.  As singer Paul McCoy explains, “The song ‘Infected’ was written about the messed up state of the world. It speaks about how crazy these times are, and about being fed up with the chaos and hatred.”
Early buzz for BENEATH THE SCARS surfaced last year as the track “Bulletproof”—which was mixed by Mike Shipley (Green Day, 30 Seconds To Mars)–made its way onto Rock radio stations across the country, including SiriusXM’s “Octane,” WIIL (Chicago), WBSX (Wilkes-Barre), KDJE (Little Rock), WRXW (Jackson), KFRQ (McAllen) and KHTQ (Spokane).  It reached #1 on the CMW “Rock” chart, where it lived for eight consecutive weeks.
As singer Paul McCoy explains, “The album title comes from knowing that we all eventually fall short of our expectations regardless of financial, emotional, physical well being.  But in the same breath, we all strive to find a way to better ourselves.  That’s human nature.  There are always two sides to people.  It’s all about realizing that we all bleed the same.  We are ALL human.  Lyrically, the songs capture the essence of life’s challenges.  As an example, the song ‘I’m With You’ is about the impact a friend’s suicide had on all of us in the band.  It’s a song of hope for those that are going through the trials we all face and the hardships that are a part of life.”
A new partnership with the Executive Music Group and a recording that is the realized vision of a decade of finding their voice in BENEATH THE SCARS has delivered a renewed passion for the future of 12 STONES.  “Thanks to EMG,” says McCoy, “we have found a new love for this industry.  I think that people forget how hard it is to succeed when you don’t have the right people in place.  We think that we are finally poised to break through the mold.  I have never felt stronger about what we are doing and I think that this is only the beginning for this band.”  Guitarist Eric Weaver added, “EMG, and their partners in Fontana/Universal, are all supporting the vision that we have for the band.  We’ve always wanted to reach out to our fans that are all over the world, and finally we’re getting to do that.  Our first tour in support of BENEATH THE SCARS will be in the U.S., and the opportunity to tour globally is something we have been waiting years for.”
12 STONES’ previous albums and singles have sold over one million copies in the U.S., in addition to singer Paul McCoy winning a Grammy® Award for “Best Hard Rock Performance” for his contribution on Evanescence’s “Bring Me To Life” smash hit single which went on to sell over 14 million albums worldwide.  The band has also garnered multiple GMA Dove Nominations for their singles “Broken” and “Lie To Me.”
Here’s the complete track listing of BENEATH THE SCARS:
1. Infected
2. Bulletproof
3. For The Night
4. Worlds Collide
5. That Changes Everything
6. The One Thing
7. Blind
8. I’m With You
9. Bury Me
10.        Psycho
11.        Only Human
12.        Someone Like You
13.        Shine On Me
14.        Pretty Poison
www.12stones.com
www.facebook.com/12stones
www.twitter.com/12stones
www.youtube.com/12stonesvideo
www.ExecutiveMusic.com