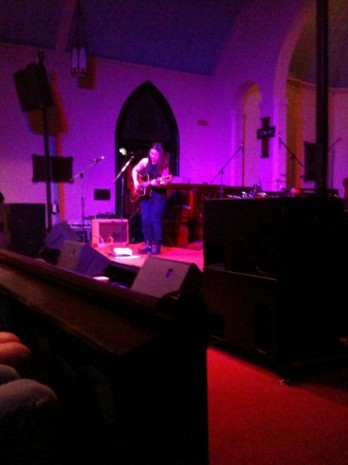 Started my SXSW Music Fest experience with a set by Jennifer Knapp, who seemed to disappear from music about half a decade ago. What a killer voice! She can hold a note forever. She declared how strange the show was. I guess she was referencing being in the very acoustic old church (St. David’s historical chapel downtown). “I don’t really need a microphone,” she said. “For those of you who aren’t familiar with me, I used to play in a lot of churches … but when I’d (get loud) it’d be like, ‘shhhh!’ I’ve gotten over that.

“I don’t have a band with me, but if you don’t hear one in your head like I do, I feel sorry for you.” Her lone voice dominated over the levels of the acoustic guitar she held. She was very proud to be opening for Suzanne Vega on this night, even though she had to jet shortly after the set for a performance in Dallas the next day. She’s still singing about light and glory in her songs. She dedicated a song “to my friends who like ’60s music. It’s my ode to Bob Dylan I suppose. She’s just one girl and a guitar, but she strums that thing loudly and her voice declares what it wants with power. “…like a stone to the river that cannot be washed to the sea…”

It’s good to have her back. 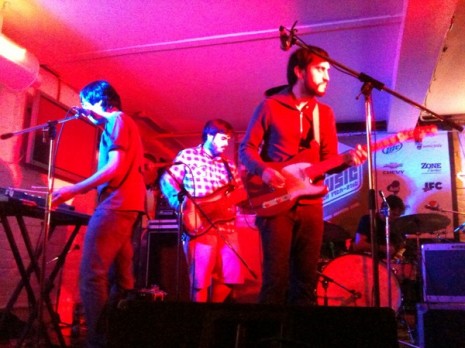 Dignan played lots of their slow, droning notes after a delayed setup time in the basement of a small club. The keyboardist was quite the multi-instrumentalist. He’d play the xylophone a bit, and set it down gingerly during the song to play his keyboards (which served as a stand for the xylophone). The band’s sound was beautiful, with lots of vocals and harmonies. After building a vibe for a song and a half, when the band turns up the volume (the vocals in particular), they really jump out. The band was really humming and on a roll after about 3 to 4 songs. They ended their set with a really nice whistling melody. 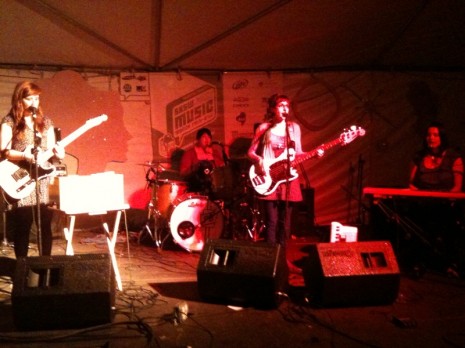 Ortolan played in a large tent that was set up to serve as an additional stage for the Beauty Bar in the venue’s parking lot/backyard. These four family girls filled up the room with lots of sound, with bass, guitar, keyboards and drums. Their big, melodic vocals were very reminiscent of Eisley. “Sticky Situation” was dedicated to “anyone that’s been in an awkward situation and didn’t know how to get out.” Another song, “Just Like Me,” featured accordian backed by a heavy, pounding drum. It was a fun, boppy clap-along song. “Sleep” featured that creepy, modulated organ sound. “Me and You” sounded really cool. It’s kind of funny to see a girl in a dainty dress play those cowboy/western guitar riffs.

When Ortolan finished and began to strike the stage, the crowd in the room surged forward and grew as people positioned to get a better spot to catch the previous band’s label owner and friend – Danielson. After a lengthy set change and lots of line checks, the uniformed band took off with a foot-stompin’ hand-clapper with lots of energy and spunk. Twice the uptempo song broke into a heavy bridge with full-on drums and the bass and two guitars (acoustic and electric) banging out some lines with emphasis. Up close it was fun to see the creative energy and direction of Daniel. He’s a very focused man on stage. The room was definitely packed. People love Danielson!

The bearded bass player keeps his eyes closed a lot and vibes with the music and the guitarist (Ben of Ben + Vesper) gyrated and strummed away on his electric like a madman. Most of the tunes were a lot faster and more energetic than the sparse, early material this veteran artist has put out. They all wore these offbeat uniforms with epaulets and ranks on their shoulders, a giant, clover-like patch on the sleeve. Front pocket area for each uniform had a hand-stitched name of each member. Each wore a hat that had a giant strawberry patch sewn on. The guys wore tams on their heads and the girls had kind of a denim Air Force hat. The girls’ outfits were like a quasi-nurses uniform. 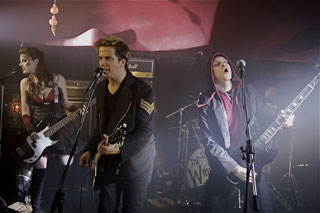 I skipped a couple of other music sets (by Invisible Target and Serena Maneesh) to go catch a rock and roll vampire movie with Alice Cooper in it. I was lucky I left when I did, because the line wrapped around the front of the Alamo Ritz Theater and all the way down the side past the alley. The movie definitely reached capacity not too many bodies past me. The movie, Suck, was an uproarious laugh-fest with lots of caricatures and posed rock and roll action. It was totally ironic that the fictitious band in the movie (The Winners) were touring towards the CMJ Convention … and this film was premiering at the similar SXSW Conference/Festival. Alice Cooper plays a creepy bartender/guide that tries to tempt and counsel the frontman for the band. It’s a role I bet he loved, as it leaned heavily on his method for the Alice character.

The band becomes vampires one at a time and when they are confronted by the vampire hunter, who vows to return them to their previous lives, tells them “You’re returning to what you were: out of work musicians. Lay still. It’s going to hurt!”

Henry Rollins plays this FM radio DJ who is all the rage in the New York area. The live on-air interview with him is worth the price of admission. What they do to him on the air is even better.

Dave Foley was a riot on stage with the cast during the Q&A session afterwards.