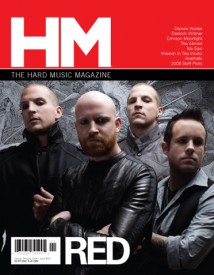 Red will go out with platinum-selling Rock band Saving Abel (who is headlining) the inaugural “CLASS OF 2009” TOUR, with Pop Evil and Taddy Porter along for the ride.  The excursion will get underway on October 27th in San Antonio, TX and continue until the end of the year.  The first leg of dates will go on sale the weekend of August 28th, with additional blocks of performances to be announced shortly.

The concept behind this new annual tour is to bring together rock artists who have achieved substantial TOP TEN hits at radio in the current calendar year.  Each year, an unsigned band, a.k.a. “The Freshman,” will be selected to open the show for the full tour, providing an opportunity that is nothing short of a launching pad.  Each of the acts on the inaugural run outside of Taddy Porter (this year’s “Freshman”) is riding major airplay at radio, and could be touring as a headliner on their own.  The submission process outlining eligibility for consideration to be “The Freshman” for the “CLASS OF 2010” tour will be unveiled soon.

Headliner Saving Abel is the first act in over three years to have three top five rock hits off their debut release.  The band’s debut singles” Addicted,” “18 Days,” and “Drowning (Face Down)” have delivered a massive fan base for the Corinth, MS. quintet.  Saving Abel’s biggest hit “Addicted,” was a #1 rock hit, crossed over to peak at #7 on Billboard’s Top 40 Airplay Chart and also sold over a million downloads.  Both RED and Pop Evil have had hits in the Top 10 this year and are quickly becoming staples at rock radio as well.

Saving Abel guitarist Jason Null offered, “I love the idea of this tour. Not only do we get to tour with some of the other hit makers of 2009, we also get a chance to help break a new artist. This is a great line-up that our fans and rock fans in general are going to be way into.  We can’t wait to get out there.”

The concept behind the “CLASS OF” tours is the collective brainchild of Rick Smith, Scott Frazier and Larry Mestel as their first project for Primary Wave Music Management along with booking agent Justin Hirschman from Artist Group International.  Future tours in the coming years will be staged, with the intent to see the concept grow exponentially in terms of the number of bands, venue sizes, and attendees.  As the years pass, the moniker will change annually reflecting the year the excursion hits the road.

Primary Wave Music Management partner Rick Smith offered, “The fans across the country continue to support rock music.  It is increasingly harder to break a new band.  Our plan is to provide a stage for new bands to play in front of large audiences.”  Scott Frazier added,” I laugh when I hear industry people say there’s nothing new and good to sign.  I live where the audience lives and this tour is for them.”

This upcoming semester should be like no other…  Class is in Session.

The itinerary for the first leg of the CLASS OF 2009 tour is:

MORE DATES WILL BE ANNOUNCED SHORTLY