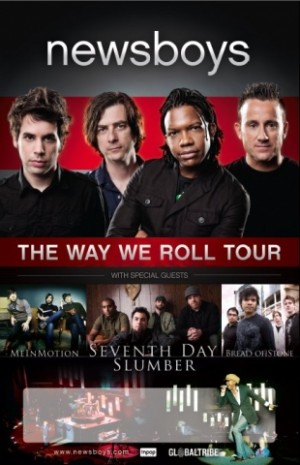 Internationally renowned rock band newsboys announces its 2009 “The Way We Roll” fall tour, kicking off in October. The legendary group will be joined by BEC Recordings’ Seventh Day Slumber, independent artist Bread of Stone, and recent Centricity Records signing Me In Motion.

newsboys’ first dedicated tour in support of its May 2009 release, In The Hands of God, “The Way We Roll” is also the band’s first full-length tour featuring new frontman Michael Tait, who stepped into the role earlier this year. The four-act bill will visit nearly 30 cities though November, including major markets Atlanta, Houston, Chicago and Dallas. A tentative tour itinerary follows this release. For the most up-to-date list of tour dates, visit www.myspace.com/newsboys.

“My excitement is barely containable,” says newsboys frontman Michael Tait. “I’m so anticipating playing more markets, states and venues that I haven’t yet played as lead singer of newsboys. My curiosities are still very much alive as to the fans and people in general’s opinion about all that’s going on with the new newsboys!”

With five gold albums, sales exceeding six million units, 25 No.1 radio hits, and a mantle of Dove Awards as well as Grammy nominations, newsboys has achieved phenomenal success in its two decades together. Known for its amazing live performances and groundbreaking tours, the band continues to sellout festivals and concerts worldwide, satisfying diehard fans and winning new ones in the process. The band’s fourteenth studio project, In The Hands of God, released May 5, 2009, is an autobiographical record and a tribute to God’s divine providence over newsboys’ long-running career. Its first week, In the Hands of God debuted at No. 1 on the SoundScan Christian Albums chart, Christian Adult Contemporary Albums chart, Christian Digital chart, No. 1 on iTunes’ Christian/Gospel Top Albums chart and No. 28 on the Billboard Top 200. The occasion marked Inpop Records’ biggest ever street week in its 10-year history and the first No.1 record for newsboys since releasing Adoration in 2003. Additionally, the album’s first single and title track claimed the No.1 spot on Radio & Records Christian AC chart. For more information on newsboys, visit www.newsboys.com or www.mypsace.com/newsboys.

From its indie beginnings at the tip of the 2000s to debuting on BEC Recordings in 2005, Seventh Day Slumber has continuously raised the bar of alternative rock excellence coupled with an unabashed gospel message. As most will recall front man Joseph Rojas was delivered from depression and a $400 per day cocaine addiction, but the story doesn’t end there. In 2006, Rojas formed Teenhopeline, Inc. to reach out to hurting teenagers and young adults in ways that are relevant to them. Teenhopeline, Inc. has now partnered with Seventh Day Slumber to ensure that those who come to the alter do not fall through the cracks when they head back to their day-to-day life. In 2009, Seventh Day Slumber released their first worship project “Take Everything,” which applied their rock, alternative style to worshipful songs. The band also received their first DOVE Award win for “Spanish Language Album” (“Rescatamé”).  For more information visit: www.seventhdayslumber.com and follow the band on Twitter @7thdayslumber .

Infused with an energy that finds its source in their passion for bringing others closer to Jesus, Bread of Stone is a Christian band based out of Sioux City, Iowa with a sound all their own. Coming from Indonesia, the largest Muslim country in the world, Bread of Stone was formed by two brothers Ben (vocals) and Bill Kristijanto (guitar) and later joined by friends, Jeremi Hough (drums) and Tim Barnes (bass), they have answered the call to ministry through inspiring music. With a unique blend of rock, pop, and worship, their music takes listeners on a journey through the heights and depths of the human experience. When asked about the significance of the name “Bread of Stone,” they state we are all merely stones that God turns into bread to feed the hungry and that without Him, no one can accomplish good in this downfallen world. With the grace of God flowing through their ministry, they have had the opportunity to see numerous people come to know the Lord. They are determined to glorify Him in everything they do, for this is the true heart of Bread of Stone.

Centricity Music’s newly signed band, Me In Motion, is comprised of Seth Mosley (lead vocals/guitar), Tim Wilson (bass/background vocals) and Brian Dexter (drums/background vocals). The group, that is known for their high-energy performances and Brit-influenced rock n’roll, created Me In Motion two years after high school and immediately hit the road with a heavy touring schedule. Having honed their musical, vocal and performing skills the band is now poised to make their entrance on the national stage. Me In Motion is gearing up for their debut project on Centricity Music that will release in spring 2010 in CBA stores but will be available this fall online and at the newsboys concert dates.

Founded in 1999, Inpop Records is home to a variety of artists including newsboys, Superchick, Shane & Shane and Mat Kearney, among others. For more information, visit www.inpop.com.

The Way We Roll Tour Itinerary