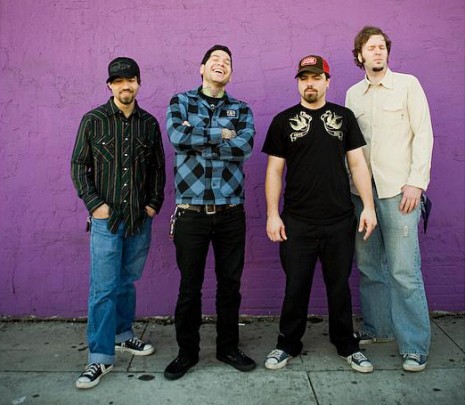 MIKE HERRERA’S TUMBLEDOWN have partnered with HOT TOPIC’S SHOCKHOUND internet site to premiere the new video for their single, “Butcher of San Antone”. The video will debut today starting at 9am PST/ 12pm EST at: http://www.shockhound.com/videos/687-mike-herrera-s-tumbledown-butcher-of-san-antone.  The track is the second single from he bands self-titled debut album, released through End Sounds earlier this year.

Mike Herrera is best known as the front-man of MxPx, but has been writing country music since 1998, and claims some of the industry greats as his influences; such songwriting legends as Hank Williams, Johnny Cash, and Bill Monroe.  MIKE HERRERA’S TUMBLEDOWN captures the punk rock energy of MxPx, while also displaying the soulful experiences of Herrera’s travels along the lonely, open road, coining their own unique pop-punk-a-billy sound.

Sticking to their DIY roots, the band teamed up with Dallas-based video director, Joe the Visualist (Joe Harris) to create their interpretation of a classic comic book from the 60’s (Eerie Comics).  Herrera illustrates the song as “the story of a vigilante priest out for revenge. It’s a comic book, pulp-style story and is definitely set apart from our other songs. It’s seedy and sleezy, just the way I like it.  I think anyone can get into a story of murder and revenge. Don’t you?”

Dark and gritty, a step away from your more traditional summer anthems, “Butcher of San Antone” does have its lighter moments with guest vocals from Nicole Pike of the Wreckin’ Machine.

SHOCKHOUND is an explosion of music culture, filled with millions of MP3s, a massive selection of band merch, exclusive interviews and videos of your favorite bands, and a community of fellow music addicts who crave new sounds just like you do.

MIKE HERRERA’S TUMBLEDOWN will be kicking off their new co-headlining tour with Jon Nolan of Starylight Run.  For a complete tour itinerary, check out: www.tumbledownhq.com.