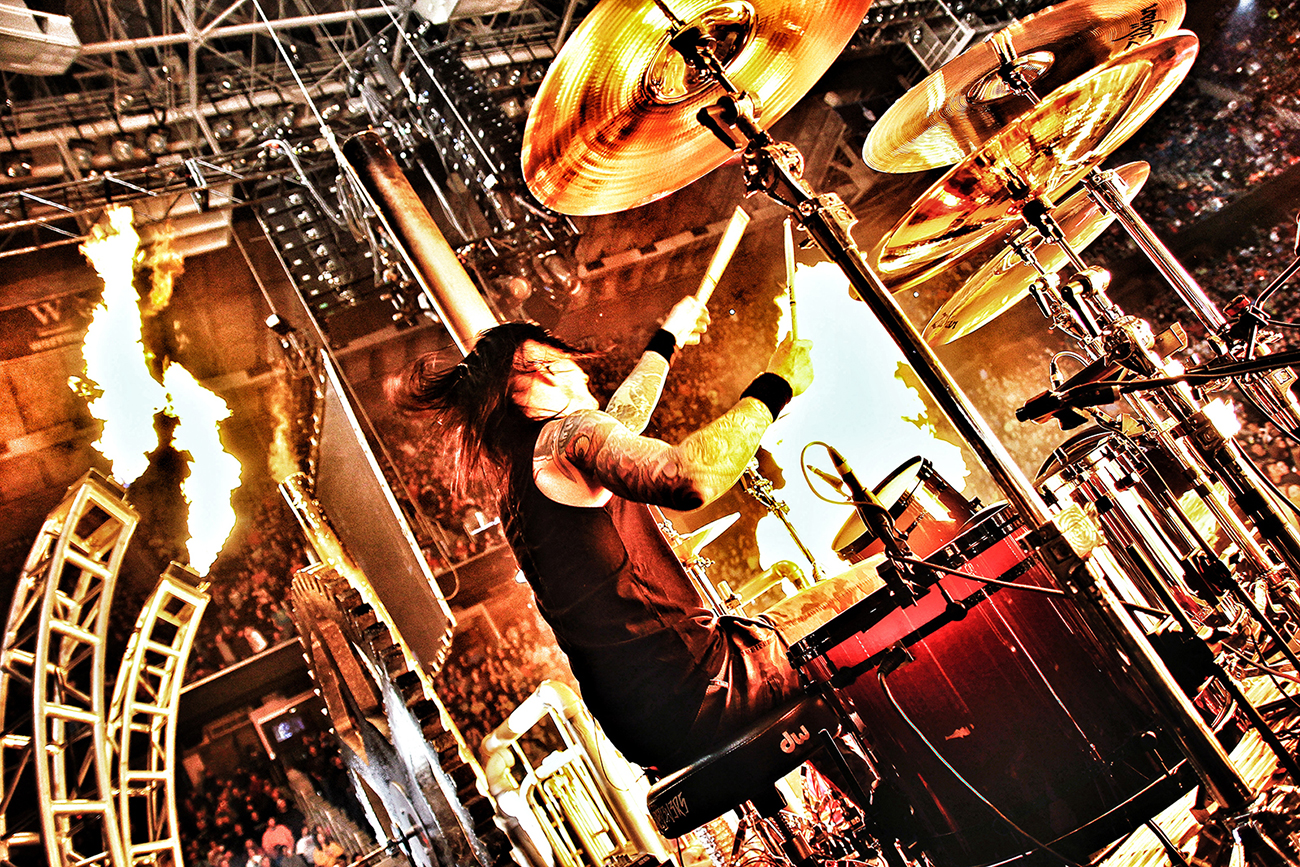 Red drummer Joe Rickard has the best seat in the house.

Red is a pretty big band.

Depending on your definition of “big,” I suppose that meaning could vary, but when you play the Tonight Show with Jay Leno and you’re on Conan O’Brien in the same week, I tend to lean towards “big enough.” Red did that a couple of weeks after they released their third full-length album, Until We Have Faces, back in 2011. It actually charted at No. 2 on the U.S. Billboard 200. A couple of years later—roughly two months ago—they again landed on the charts at No. 7 with their most recent effort, Release The Panic. Panic was all over Billboard: Rock Album, Hard Rock Album, Alternative Album, Digital, Christian, Independent. It’s an artist’s dream: Make a record you’re simultaneously proud of while still appealing to a critical mass. And Red did a pretty good job of this—good enough, at least, to keep their lease on the Billboard charts.

It’s an enviable position for any musician, especially for drummer Joe Rickard. He didn’t actually join the band until sometime around 2009, and he knows musicianship isn’t always Billboards and roses. “Getting started in music is not very glamorous for most,” he says. It’s what feels like a one-in-a-million shot. I haven’t done the numbers, but the odds of landing a single track on a Billboard chart at any position—let alone an album or two—may actually be a million to one.
It doesn’t look like Red’s planning on slowing down anytime soon either, treating their careers a lot like marathoners. They’ve had a steady diet of record releases every two to three years and kept their inspirations fresh doing other ventures when not touring; Rickard’s a budding entrepreneur and songwriter.

Recently, Rickard shared some insight with HM into his technical life, as well as a little bit about where he came from. When he first started touring at 17, “big” might be a dream he just aimed for. But now, from the best seat in the house, Rickard can view the world from a higher perspective.

Let’s start with your drum setup. How has it evolved?
Over the years, I’ve learned more about what works live and what works in the studio. I use a five-piece kit almost all the time: big drums, deep snare… I like the look of it. I prefer the sound of big drums. I’ve settled into a certain style and sound. I want people to know that it’s me playing by the sound of my drums.

I’ve been using a Spaun Custom LED Acrylic Kit for a while and just got my second acrylic kit for the Release The Panic tour. I use Evans drum heads, and I am always trying out different ones. I’ll get hooked on a certain head for a while and then switch to something different.

Also, I recently added a couple more Zildjian cymbals to my setup, mainly just to change things up a little; it’s always fun to have something new to smash. I usually stick with playing a single kick pedal. The past two Red albums (Innocence and Instinct and Until We Have Faces) have a little double-pedal playing here and there for some different flavor, but on the new Red album (Release The Panic), I used only one pedal the whole time.

I’m definitely an advocate of practicing your instrument. I have an electric drum kit I bring on the road with me, and I set up in our dressing rooms for practice. When I’m home, I have a rehearsal spot I go to often.

How would you describe your role in Red? What roles do you feel like the other members play?
Red is definitely a team. We all have different “band jobs” that we do to split up responsibilities. Being on the road a lot and being away from family is a hard thing, so it’s helped us to have a good understanding of each other and to learn to respect each other’s time.

Hearing someone come up to me and say that Red saved their life and that they wouldn’t be here without us is an indescribable feeling.

What has God done through the band that amazes you?
The reason I began playing drums in the first place was to start playing at this small church I went to in Houston, TX. I knew from the beginning that I wanted to make an impact on the world through music and drumming, which has turned into an amazing opportunity with Red. I see how much this band means to people and how much the music can inspire them. Hearing someone come up to me and say that Red saved their life and that they wouldn’t be here without us is an indescribable feeling. It usually leaves me speechless.

God is using this band—and the four guys in it—for His glory. That’s why we’re here.

How has your personal faith changed over the years?
I started touring when I was 17. I was very green and young, but my faith was strong. Over the years, I’ve learned more and more to trust in God. Getting started in music is not very glamorous for most. It’s a lot of sleepless nights driving in a van, and there’s not really any money coming in. I had to keep reminding myself why I was out there on the road and that God would always provide—which He did.

Years later, I’m still touring, things have gotten a lot better, and God is here just as much as He always has been.

What are some of the things that only the drummer sees?
Being in what I like to call “drum world” can be intense some days (laughs). With all of the pyro, things blowing up around me, and loud music, it can seem like a war zone. My drum tech (Derek Benitez) takes really good care of me during the shows. We have issues sometimes, like breaking a snare head or a kick pedal, so things stay interesting for us.

Seeing a crowd from my drum riser is one of the coolest things—I definitely have the best seat in the house.

What else is going on in your life?
I have a couple of new ventures I’m working on outside of drumming. I like to stay busy and get into new business ventures. Plus, I really enjoy songwriting. I get the opportunity to do some co-writing in Nashville in my time off.

One of the coolest projects I’ve worked on was the new Love And Death album with Brian “Head” Welch. It was an honor to write with him—and, of course, I had to be a part of the drums, just for fun.

Red was posted on May 5, 2013 for HM Magazine and authored by David Stagg.