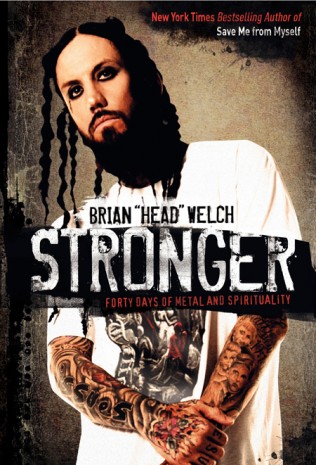 For the next few weeks we will be posting excerpts from Brian’s new book, Stronger. Here’s the second excerpt.
Read. Enjoy. Practice.

Hebrews 12:10–11 (NIV)
Our fathers disciplined us for a little while as they thought best; but God disciplines us for our good, that we may share in his holiness. No discipline seems pleasant at the time, but painful. Later on, however, it produces a harvest of righteousness and peace for those who have been trained by it.

Tattoos hurt.
If anyone tells you that repeatedly sticking a needle into your body to get a tattoo doesn’t hurt, they’re lying through their teeth. I’ve got tattoos on my arms, hands, back, face, neck, stomach, chest, leg, and palm, and every single one of them hurt. I’m getting one in my armpit next. It’s gonna say, “He lifted me out of the slimy pit” (Psalm 40:2, NIV).

Clever, right? Ha-ha! I’m a nut job and I love it! And Jesus is crazy about me. He’s crazy about all of us; He can’t help it. And just as Jesus shows his love for us in different ways, every Christian chooses to express his or her love for God in a unique manner. As you might have guessed, tattoos are a big part of my expression.
I guess the main reason I like to express myself by getting tattoos is the line of work I’m in. I don’t have to work a normal job, so that gives me a lot of freedom. Most metal musicians are the same way, often inked top to bottom. Nowadays, it seems like the people who don’t have tattoos in the metal music world are the oddballs. It’s just how it is.

I had only a few tattoos before I became a Christian, but the ones I did get were very meaningful to me. The word “ issues” on my right forearm was tattooed on me when I was going through my divorce. Another one from that time period—an art piece on my right arm—symbolized me starting over in life. The two names on the back of my neck are of my daughter Jennea and a daughter I gave up for adoption (who’s someone else’s beloved daughter now). I guess a lot of my tattoos are memorials of pain, reminding me that I’ve gotten through a lot of heartache in my life so far. The Christian tattoos are reminders to me that God brought me through the worst of my pain and that he will be there with me to face all the pain I have in the future as well. The second half of life is where most people face the most pain, so I’m glad I have all these beautiful art pieces reminding me that I can get through anything with the strength Jesus gives me.

I’ve been through a lot for the tattoos on my body, and I have enough ink on me to know that getting that armpit tattoo is gonna hurt. Under the arms has got to be one of the most sensitive areas on the body—ouch! Though I must say, getting a tattoo on my palm was an interesting experience of pain. Grab something sharp or use your fingernail to scratch your palm. It feels kinda weird, right? The nerves make it so that it both hurts and tickles.

When I got my palm tattoo, I was in Canada visiting my friend Todd. He took me to the shop where he got all his ink done, and originally I’d planned on getting only one tattoo near my neck. The artist told me about a Mafia member that he’d once tattooed on the hand, and apparently that tattoo had made the “tough guy” scream like a girl. I told him I was thinking about getting a tattoo on my hand that said, “DT 28:13”—standing for Deuteronomy 28:13, which says, “The Lord will make you the head and not the tail” (italics added). He said he could do it, but even with all my experience with ink, I was kind of afraid after hearing how the Mafia guy had carried on.

At the end of the day, though, I did it. It took about three guys to hold still my hand and arm as I got that tattoo. Each time the needle went into my skin, I felt the weirdest sensation. It hurt like hell and tickled at the same time, and though I tried not to scream at all, out of my mouth came the strangest noise I think I’ve ever made—a combination of a scream and a laugh. In the end, though, the tattoo came out just as I’d envisioned it.

A few months later, I came up with another one of my “ brilliant” ideas. I made a trip to L.A. and decided to go to three different tattoo artists to get as much work done as I could. Two brothers named Mikey and Tommy Montoya totally sleeved my left arm the first couple days in L.A. Mikey did the Korn CD cover for Untouchables on my lower-left forearm, and Tommy did a portrait of Jennea beneath a picture of the famous statue of Jesus in Rio de Janeiro, Brazil, on my upper arm. The following day another dude in Hollywood did my record company’s logo, “H2C,” as a back piece. I had it done in red, and it looks like blood is dripping down my back.

I didn’t know it ahead of time, but all the pain endorphins in my body were completely shot by the beginning of that third day. I lay down on the guy’s tattoo bench and he stuck the stencil on my back. Then he went over it with a regular ink pen to fill in the faded lines. I should have suspected right then that my pain endorphins were shot, because even that ballpoint pen hurt! When he actually started the tattoo, it felt like he was literally carving chunks of flesh out of me with a knife. I practically jumped out of my skin. I simply couldn’t lie still. I think I even shed a tear. The artist couldn’t do any straight lines because I was moving so much. All we could finish that day was the outline of the piece.

My friend Walter Frank, who worked at Chester Bennington’s Club Tattoo in Phoenix, ended up finishing the “H2C” back piece for me later on. I was so traumatized by the first experience that I had to have him use a powerful numbing ointment on my back—something that had been invented for severe burn victims.
An artist named Killer tattooed the name Jesus on my palm in 2005 after I got saved. At the same time he tattooed some flames on the back of my hand. I don’t know if this dude’s hands were heavy or what, but man, I could barely stand getting that tattoo. The pain was up there with the back piece, though nothing can really compare to that pain. I remember my hand throbbing in agony as Killer was finishing the tattoo. I actually threw in the towel before it was done because I couldn’t take anymore . . . until a friend of mine, Bill Vanboeing, who had tattooed the “issues” piece and the art piece symbolizing me starting over on my forearm, came in the shop and called me a punk. I thought I’d show him, so I decided to man up and get the tattoo. The result? An hour after the tattoo was finished my hand had swelled up to double its usual size. No joke! In fact, I was planning to go to the hospital the next day if it didn’t go back to normal. Yeah, it was that bad. Luckily, by the morning the swelling had gone down quite a bit. But man, was it sore for days afterward.

Obviously, the pain isn’t my favorite part of getting tattoos, but it’s a part of the process I have to go through in order to get the cool art on my skin that makes me proud when I see it. It’s a totally different way of looking at words and images from the Bible. A totally different way of projecting my faith. While the pain is hard, it’s worth it because the finished product adds a new layer onto my faith and offers a visual representation of my experience that I can share with others.

I’m an artist because I love art. The art of music, the art of pictures, paintings—any type of art is awesome to me. It totally speaks its own language of the heart. But with art creations, there’s usually a long process before you get to see the finished product. In the same way, each of us is one of God’s art pieces. He has to shape us and mold us like clay in order to turn us into the works of art that He desires. Oftentimes, it’s a painful discipline we have to endure, but in the
end, we are God’s masterpieces. And just like most artistic creations, there’s a long process that God takes us through in order to make our character shine like Christ’s.

By getting tattoos, I feel that I’m doing my part as one of God’s masterpieces by becoming a literal work of His art. By doing so, I share His holiness with everyone I connect with. Holiness isn’t some obnoxious religious word. Holiness is the very character of God—perfection, beauty, love, majesty, power, pure goodness. God wants to share His character and nature with us, but there’s a price we have to pay on our part. We have to trust God with everything we have inside of us, because, as today’s scripture passage from Hebrews reminds us, “no discipline seems pleasant at the time, but painful. Later on, however, it produces a harvest of righteousness and peace for those who have been trained by it.”